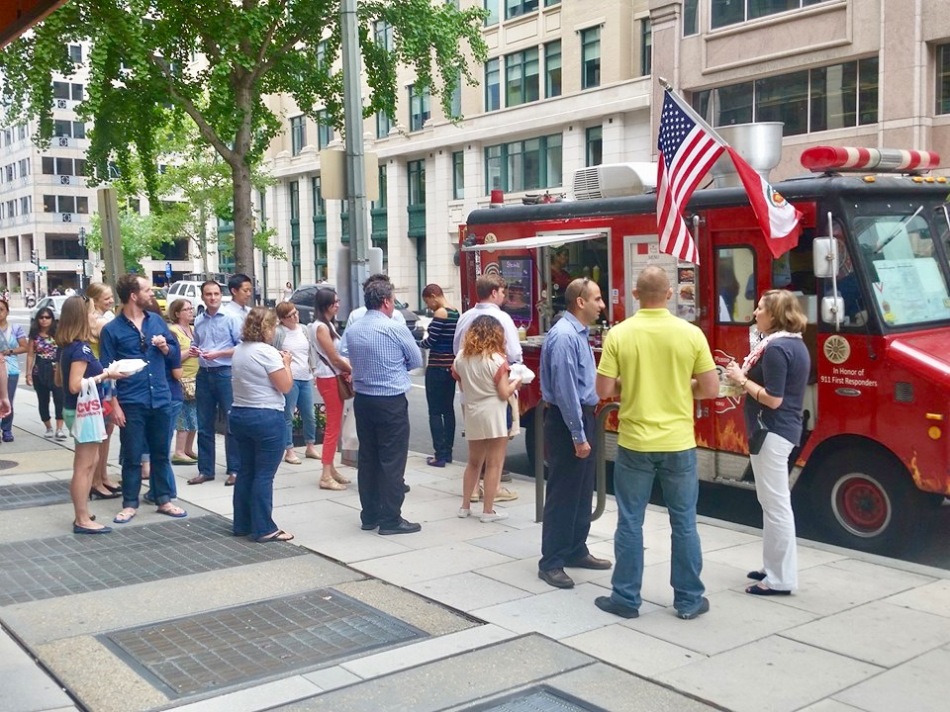 For the Mid-Atlantic’s original Peruvian food truck owner Chef Manuel ‘Manny’ Alfaro, his love for Peruvian cuisine started after coming back to America upon finishing his culinary studies in Spain and meeting his Peruvian wife. For twelve year’s he lived and studied in Galicia, in the northwest corner of Spain where the seafood is plentiful and wonderful, not unlike Peru’s own coastlines. But, for Puerto Rican-born Alfaro, he appreciated how the rich plant and animal life of Peru formed a gastronomy unified with Spanish and even Asian influences, forming a cuisine unparalleled.

When he started the food truck in 2012 in Washington, DC, he was still working at the time as a chef at restaurants in the region. It was then that Alfaro’s daughter Stephanie, tired of seeing her father working early mornings and late nights’ day-in-and-out, approached him one day about opening a food truck to sell what he really wanted to cook. Encouraged with the idea, he put in his notice at the restaurant and began getting things ready to bring his passion for Peruvian food to the masses.

“The biodiversity of Peru enables dishes you can’t create in Spain,” Chef Manny explained. “For example, Peru’s cuisine is influenced by the Spanish, but also its Creole cuisine is very much influenced by Chinese cooking styles that arrived in the 1800’s, and then before WWII the Japanese and after WWII the Italians were bringing in their styles of cooking.” Influences on Peruvian cuisine even include now common basics ingredients like onions, garlic, and olive oil.

Using a converted fire supply truck from a fire station, Chef Manny restored the vehicle after purchasing it from a retired captain in Rhode Island. He was a volunteer firefighter for two years while attending college in Florida, and on the side of the food truck he added a sign in honor of 9/11 first responders. On the side of the truck, you’ll also find “Peruvian Fusion Cuisine” with drawings of Peru’s famed Nazca Lines, as well as some of Peru’s best street foods served on board.

“We created the menu for the truck when we were in Peru the summer of 2012 and spent two monthly in Trujillo, the town my wife is from, with her family and worked with my nephew who is a trained chef in Peruvian seafood. We knew for a fact we needed to offer Peruvian flagships like the ceviche and Lomo Saltado.”

It was after Chef Manny started the food truck that he realized there was a sort of “food desert” when it came to Peruvian cuisine in Washington DC, which stretched the Mid-Atlantic. Upon opening, El Fuego became the first Peruvian food truck in the Mid-Atlantic region— along the entire east coast, from Georgia to New York.

“Back then, not even in NYC were there Peruvian food trucks. Now the scene is growing, with Peruvian food trucks and restaurants popping up every day,” Chef Manny explained. He feels a humble sense of pride in El Fuego helping to serve as a catalyst to usher in- and get Peruvian food off the ground in the Washington DC area.

In fact in 2012 and 2013, Peruvian government organizations took Alfaro and other purveyors of Peruvian cuisine in the world under their wings as the country started to promote the cuisine worldwide. In recent years, Peruvian cuisine has gained its wide popularity. He was also included in a worldwide promotion, selected among a few non-Peruvian people that are doing things they love in celebration of Peruvian culture—for him, it was the gastronomy.

The food truck is very popular with the lunch crowd in DC and Northern Virginia, including work hubs like Arlington and Tyson’s Corner. “We cook everything to order on the truck; we don’t bring the food pre-cooked from a restaurant or commercial kitchen, and besides the rice that we make plentiful in a rice cooker on the truck every dish on the menu that our customers order is cooked fresh, stir fried quickly over high heat—one Lomo Saltado takes 1 minute and 45 seconds to cook.”

Save 15% off The Explorer Trip to Peru with Contiki Tours. Learn more »

Also on the menu, Nikkei, a Peruvian-Japanese fusion or creole noddle stir fry dish, and Salchipapas, a snack a lot of people including kids have in Peru. It consists of a bed of freshly cooked crispy French fires topped with kosher hotdogs, and smothered in Heinz ketchup as well as a signature sauce made from Peruvian peppercorn called Rocoto.

The truck’s El Fuego Burger comes full circle in America. “Inspired by one of my favorite burger spots in Trujillo, Peru, the toppings on the burger are very Peruvian. This is an example of fusion with American culture. When you get a burger in Peru you get as many pieces of meat as you want and they’re blended. Our version of this popular street food incorporates a one-third pound black angus beef burger, and it’s been a big hit!”

It’s now been five years since Alfaro was named Peruvian Gastronomy Ambassador for the Washington DC area by the Ministry of Exterior Commerce and Tourism of Peru (MINCETUR). His love for Peruvian cuisine evident, Chef Manny was one year the only chef in the United States invited by the Peruvian government to attend MISTRUA Peru—the largest gastronomy festival in the country—to share Peruvian cooking demonstrations and tips.

“A few years ago, the largest commercial newspaper in Peru came out with a list of the top ten things Peruvians identify themselves with: one, Inca Kola, second, MISTURA, and three, the MINCETUR,” Chef Manny told us. He is grateful for the great honor of the help to his business at El Fuego from the promoters of Peruvian tourism and commerce.

“I was able to meet the minister [of Tourism], and they did and continue to do an amazing job to promote not only Peru as a culture, but also Peruvian food and the culture. Peru has won a lot of awards, and has done a great job promoting and exporting products worldwide. It’s really been able to give me the push to be able to give a real authenticity to every dish El Fuego creates.”