I believe there’s more for local travel enthusiasts to learn about international dishes just by stepping into their backyard than by reading a second-hand account in a book, blog or television program about a country first. That’s why this series of articles will be based on the advice of local business owners whose cultural influences have not simply intrigued- but shaped them, allowing the essence of a culture to become their very livelihood.

It’s because getting travel advice about international food that comes from the heart of someone that shares for a living forms an experience you can trust. It’s bound to feed more than your senses. A peer or friend’s opinion, or even a review on where the best international dishes are in your backyard might be a place to start, but read on in our series for the thoughts of true connoisseurs who’ve been influenced abroad and now share their learnings.

Our hope is that getting to know cultures through food favorites of local businesses will guide you to stumble upon something new that you didn’t know you’d love.

Read on as four Austin business owners share their favorite dishes, including why they enjoy the food, and where they remember it best prepared abroad.

Astrid is a local artist that owns Astrid’s Colombian Jewelry, a handmade shop in Austin featuring beautiful accessories from bracelets to earrings and necklaces made from natural materials like nuts and fruits, like in her native Colombia. Her favorite dish is a soup called Ajiaco con Pollo, from her state of Cundinamarca. Ajiaco is made with chicken, green peas and carrots, and different kinds of potatoes, including yellow or Andes potatoes, whichever can be found locally in Austin. 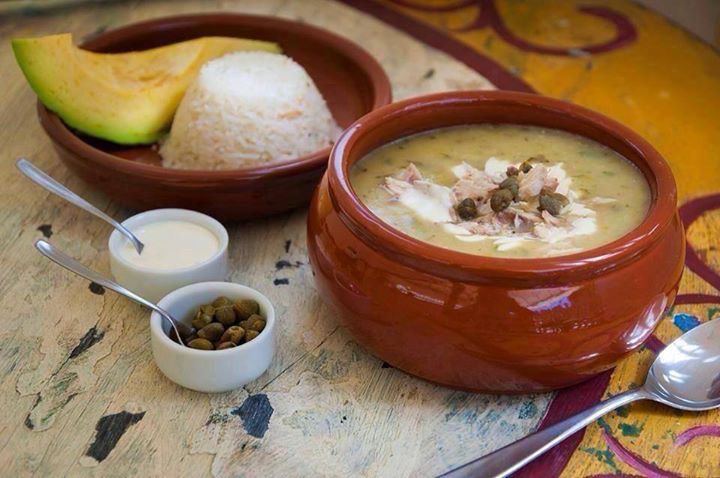 The soup is made with guascas, a plant from the daisy family used for seasoning, which can be found in the Altiplano Cundiboyacense in the eastern Colombian Andes Mountains. “Colombia has a [rich] variety of food depending on where you are located… and everything is pretty yummy,” Astrid shared. She’s enjoyed this dish in her home state, and for the travel enthusiast recommends the small Colombian town of Machetá in the state of Cundinamarca because of it’s good food, but also amazing views, friendly people and outstanding landscapes.

When we asked Iska, the owner of south Austin’s genuine Cuban eatery Cuba512, formerly Guantanamera, what his favorite Cuban dish was, he said it was most definitely the Sandwich Cubano—the quintessential Cuban Sandwich because it’s so simple and delicious. “The ingredients inside a Cuban sandwich are simple: ham, roasted pork, Swiss cheese, pickles, mustard, and every Cuban sandwich needs Cuban bread,” he shared. He also explained that although comparable to French or Italian bread, Cuban bread has a different baking method and ingredient list which makes the difference.

A native of Cuba, he recalled having the best Cuban sandwich in the city of Bayamo. He said that there the sandwich he had was made with pork, lechon in Spanish, roasted with firewood from the local hills. When considered, it’s understandable why the version of the sandwich served at Cuba512—coupled with a thoughtful ambiance and signature drinks like a crisp mojito—the restaurant maintains an esteemed level of authenticity to get you as close to Cuba as you can get in Austin.

Ali, the owner of food truck Austin’s Habibi tucked below a towering skyscraper downtown, turned his childhood passion and family legacy into a local eatery. He serves the type of fresh, healthy and flavorful food that the eastern Mediterranean is known for, from Greece to the Middle East. While he features a number of savory dishes for locals to try, he also recalls his favorite dessert—a small, shortbread cookie called Kombe, in Turkey, but also known as Maa’moul in Jordan, where he had the best version of the treat because of its tasty and plentiful when served.

A native of the eastern Mediterranean, he especially enjoys Greece, a reason for the Greek influence in the dishes he serves. When he came to Austin, he decided to open the same type of eateries he grew with abroad while working with his father. Offering a taste of home, he also seems to remind us that no meal is ever complete without dessert. Curious cultural enthusiasts should stay tuned as Austin’s Habibi will be opening a brick-and-mortar restaurant soon.

YOU MIGHT ALSO LIKE: Book this deal for just $1 and Get $12+ in Exclusive Savings at Austin’s Habibi

Miguel owns and runs the downtown Austin food truck Llama’s Peruvian Creole. Although his favorite Peruvian dish varies, he’s a big fan of Lomo Saltado, which his eatery also serves up. The dish is “a beef tenderloin stir-fry over steak fries and garlic rice to soak it all up,” he shared. In the version served at Llama’s, Miguel includes homemade sauces on the side, such as Rocoto, Huancaina, and Anticuchera.

“I’ve tried Lomo Saltado all over Perú. Besides finding quality beef perfectly cooked and smoky, the Huacatay sauces I encounter in Perú are uniquely delicious,” he shared. In his book, Perú always wins when it comes to ingredients because there’s nothing like a well-prepared dish served in the coastal South American country. He invites curious cultural enthusiasts to stop by Llama’s on September 4th for a free sample during its first annual Lomo Saltado Day.

Ready to explore more about Colombia, Cuba, Jordan or Peru? Let these few favorites be your guide. In Austin, if you look closely there is a slice of so many countries that you can start to explore locally.